What is mobile inmate tracking? | GUARDIAN RFID
All Solutions

What is mobile inmate tracking?

What is Mobile Inmate Tracking?

Mobile inmate tracking is a technology for automating your offender tracking objectives using handheld scanners or mobile devices to auto-identify one or more offenders electronically and collect data about what you see them doing, where you take them, and what you give them.

When corrections professionals talk about mobile inmate tracking systems, they are often referring to a mobile application installed on a mobile device or handheld scanner that manages a wide range of responsibilities, such as guard tour, inmate movements, headcounts, razor passes, and other activities frequently logged by manual entry into a jail management system, spreadsheet, or paper log book.

These tasks are performed on devices that frequently run on today’s most popular operating systems: Android and iOS.

This blog breaks down differences between SPARTAN vs. iOS devices, such as iPods:

Who is Mobile Inmate Tracking for?

More sophisticated mobile inmate tracking systems will also identify security violations that may not be plainly apparent, such as keep separate violations between specific offenders based on matters such as gang bias or classification. These data types are frequently integration points between the offender management, jail management, or case management system already deployed at a facility and the mobile inmate tracking system.

Decentralizing this information enables corrections professionals at all levels to become more agile and aware of security threats than before because this data is now portable and actionable..

Data visibility and access makes it easier to collaborate and increase productivity. Everyone on shift can see which inmates are out of cell and where. Headcounts can be performed with greater speed and accuracy because inmate movements are now logged in real-time, versus using manual systems, such as booking cards or other rudimentary, paper-based approaches to logging and communicating inmate movements. Mobile inmate tracking can be especially beneficial to facilities with higher inmate to staff ratios, or those facilities looking to eliminate process inefficiencies born out of high-dependence on manual systems.

Don’t just take our word for it! Check out some facilities who have already deployed GUARDIAN RFID, and how they use it in their facilities. Warrior Success Stories 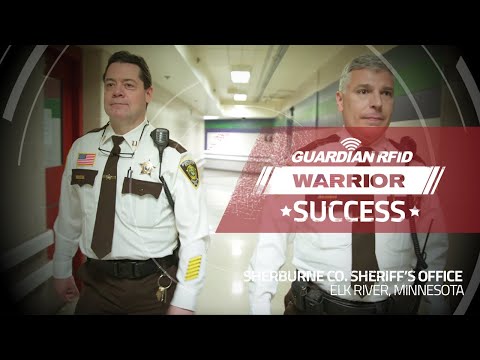 Sherburne Co. Jail is a Warrior with the Command & Control Platform - 4k | GUARDIAN RFID
Pride and professionalism are hallmark traits for Sherburne Co. Sheriff's Office. One of the largest detention facilities in the Twin Cities and 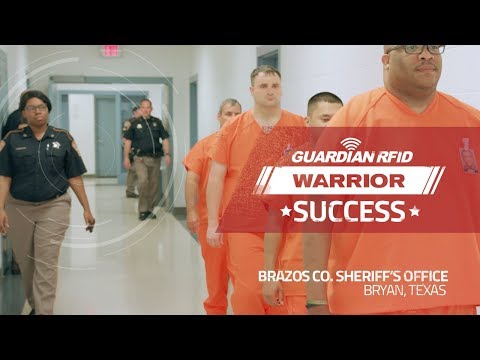 Here’s why Mobile Inmate Tracking Systems Should Matter to your Team.

Today, mobile devices are everywhere. They are deeply embedded in our personal lives. According to Pew Research Center, 95% of Americans own a cellphone of some kind with 77% owning a smartphone. There are nearly 224.3 million smartphone users in the U.S. Simply put, mobile is pervasive and widely accepted across all sectors and industries.

Corrections officers expect technology to be as good in their professional lives as it is in their personal lives. More want instant gratification. They look at manual systems as highly peculiar relics and processes that need to be overhauled. Some law enforcement agencies even look at technology upgrades, such as mobile inmate tracking, as a means of improved recruitment and retention, beyond the business value that the enhanced security automation mobile inmate tracking provides.

But most importantly, mobile inmate tracking gives you a clear, concise, and consistent view of your operations. You can standardize processes more effectively. You can interact with your data, on your terms, and you can measure operational performance in ways that logbooks and manual entry cannot.

Traditionally, the emphasis on mobile in law enforcement has been predominantly laptops used by road deputies. Today, mobile proliferation extends to jails, prisons, and juvenile detention professionals seeking to get from behind the desk, interact with offenders more frequently and increase their physical presence as a means of improving operational awareness.

This can include data collection that triggers system notifications or push notifications to all users or certain user groups to communicate workflow automation, such as inmates arriving to a predetermined out of cell destination, such as medical, and letting the housing officer know that the inmate(s) arrived within a certain period of time without having to radio to control.

When you have high dependence on manual processes and paper-based systems, you have less time for everything else and consume more time looking for the information you need. A dynamic staff executing their responsibilities adeptly will generate significant amounts of data. But if it’s stored in handwritten log books, antiquated guard tour devices, or manually entered into your jail management system — or all of the above — you’re siloing this data into systems that can’t communicate with each other. This will require more time searching and manually collating reports, possibly leaving out information that could be vital to demonstrating your compliance or defensibility needs.

Mobile inmate tracking generates a wealth of actionable, measurable, real-time data that can be translated into insights you never realized. This intelligence is centrally stored and securely accessible to your team members anywhere, on any device, at any time, and takes the mystery out of who’s doing what and when was it done?

Whether it’s data that demonstrates compliance with your cell checks or well-being checks, which has real repercussions to jails in states with formal jail standards, such as Texas, North Carolina, Idaho, Pennsylvania, Minnesota, California, Wisconsin, Washington, Iowa, Nebraska, and many other states, or logging inmate law library access, commissary deliveries and certified legal mail, to medication administration records, every log entry has the power to exonerate and protect you from allegations of impropriety, deliberate indifference, or non-compliance.

What does a mobile inmate tracking system do?

A mobile inmate tracking system helps you automate important, but often highly repetitive processes that can be critical to your security and compliance. Mobile inmate tracking helps increase staff productivity by decentralizing a wide range of your data collection needs. Workflow automation is standardized. Staff at all levels are better connected to see what’s going on. Each team member is empowered to automate their own tasks, such as collecting cell check data at frequent intervals, performing positive ID headcounts, and logging inmate movements. All of this data is centrally stored. System notifications can be pushed to team members when razors are passed, inmates are out of cell, and when security rounds are due, or may be late, for example.

Mobile inmate tracking data is captured in real-time, giving staff at every level a complete record of inmates, staff, and shift members to validate performance, accountability, and compliance. This includes historical and real-time data to gain a 360-degree view of your inmate management operations.

The next-generation of mobile inmate tracking uses auto-identification technology, such as radio-frequency identification (RFID) and the Cloud to collect actionable intelligence faster and more accurately. RFID combined with mobile inmate tracking frees up staff time so that ultimately, inmates are more closely monitored than ever before to enhance safety and security. There’s far more precision when it comes to knowing exactly what inmates and staff are doing, with the Cloud unifying the entire effort so that you gain uncompromising operational awareness from anywhere, on any device, at anytime.

1. MAKE IMMEDIATE IMPROVEMENTS TO YOUR LOGGING OBJECTIVES AND BOTTOM LINE.

Manual and paper-based systems can cost you thousands of hours of wasted productivity each year, not to mention a complete inability to accurately measure and monitor workflows critical to your compliance and defensibility. For example, top-performing facilities use mobile inmate tracking to measure security round performance, including percentage of compliance by shift, team member, etc., with real-time notifications of non-compliant events. Others will automate positive ID headcount performance and measure the time it takes to clear count pod by pod, unit by unit, to pinpoint potential bottlenecks in the process.

Many facilities today have adopted a wristband for visual identification purposes only. Mobile inmate tracking brings your inmate wristbands and ID badges to life by digitizing these assets so that they can be scanned or read electronically. Using RFID wristbands or RFID cards, for example, can increase your data collection by an order of magnitude, which in turn, can help your staff share and analyze data that didn’t previously exist at lightning speeds.

In fact, next-generation mobile inmate tracking systems naturally extend the capabilities of your staff, taking the most commonly used parts of your jail management system, traditional whiteboards, and other manual tools to help staff work faster and smarter.

Here’s what a mobile inmate tracking system offers your facility.

Mobile inmate tracking systems and the Cloud computing revolution are changing everything.

Correctional facilities, who already under-resourced with lower than desired staff counts and limited technical expertise are turning away from on-premises software systems to the Cloud to leverage technology that accelerates time to deployment, markedly lower upfront cost and ongoing expense, and empowers the real-time, secure connectivity to data and applications that many experience in their personal lives today.

Inmate tracking systems such as GUARDIAN RFID (Learn more: What is GUARDIAN RFID?) mean that your team members are equipped to collect and share massive amounts of actionable data analyzed in real-time by the Cloud. The automation that mobile inmate tracking systems like GUARDIAN RFID deliver directly address gaping holes in manual and paper-based approaches while realizing the real-time connectivity, collaboration, and communication between staff members many facilities have sought to achieve.

When you deploy a mobile inmate tracking system, you’re investing in the success of your entire team to work smarter, more aware, and more safely than ever before. You’re collectively strengthening your compliance and defensibility objectives, measuring and monitoring performance in ways that may have seemed next to impossible. 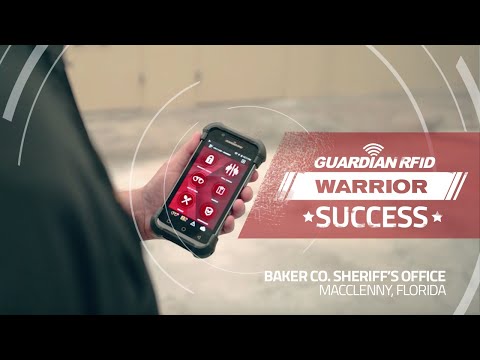 Baker Co. Sheriff's Office is a Warrior with the Command & Control Platform
"Inmates are people who just made different decisions. We try to help them make better decisions, or avoid the pitfalls that got them here in 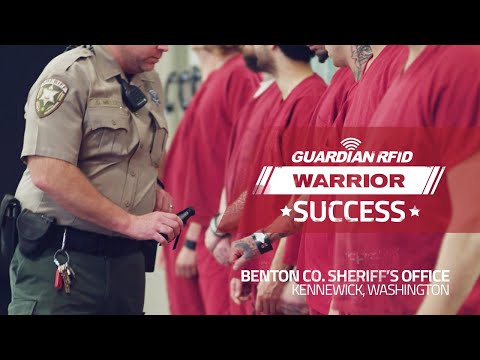 Benton Co. Sheriff's Office is a Warrior with the Command & Control Platform | GUARDIAN RFID
Lt. Joshua Combs has led Benton Co. Corrections' transformation from paper logs to digital. Learn how these Warriors have created a safer, 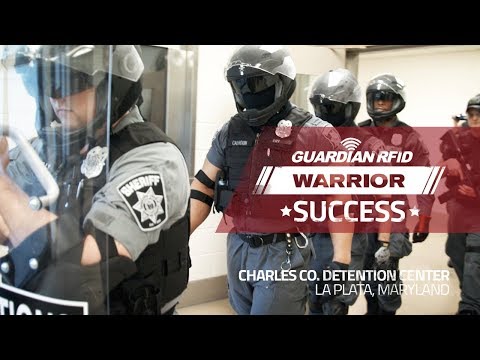 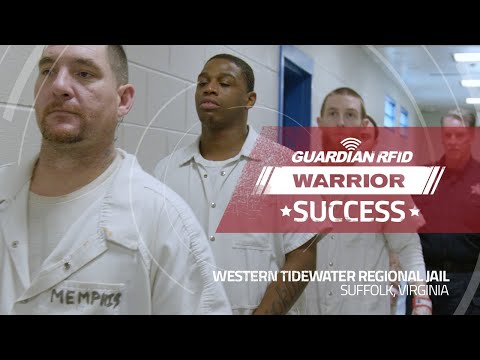 We're here to answer any questions you may have regarding mobile inmate tracking in your facility. Reach out!